RANCHO MIRAGE, CA (September 13, 2021) Desert Theatricals announces ticket sales for their season of Broadway style musicals on October 4, 2021.  The season opens with two FREE events presented by the City of Rancho Mirage and the Rancho Mirage Library & Observatory.  First up is Desert Theatricals, Jr production of “The Little Mermaid, Jr.” November 20th and 21st at 7pm followed by the city’s holiday show “A Christmas Carol” on December 11th and 12th at 7pm.  Free tickets can be secured on-line at www.desert-theatricals.com.  The Broadway musicals kick off with the smash hit “Mamma Mia” February 18th and 19th, “Annie Get Your Gun” March 18th and 19th and “A Funny Thing Happened On the Way To The Forum” April 15th and 16th.

Tickets are available for all shows at www.desert-thetricals.com where you can purchase General Admission tickets on the site.  For reserved dinner theatre seating under the stars, you can call or email to reserve tables of 4 or 6 catered by Acqua California Bistro.  For dinner theatre reservations call 760-620-5993 or email info@desert-theatricals.com

There will be additional food options for General Admission seating at the amphitheatre as well as full bar service.  No outside food or beverage allowed. 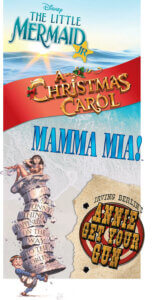 DESERT THEATRICALS was originally founded in 1994 in Vista’s Avo Playhouse.  They provided 7 seasons at the Poway Center for the Performing Arts in San Diego County.  From there, they created and produced 13 seasons of Tustin’s Broadway in the Park, then two years of Tustin Light Opera, before returning to San Diego.  In 2017, producers Ray Limon and Joshua Carr relocated to the Coachella Valley. Just three years later they have garnered Desert Theatre League and BroadwayWorld.com awards for outstanding professional programming and professional musicals including best actors, director, choreographer, musical directions, sound and best production.